Culture and language play a huge role in FLYING THE DRAGON. As a reader, I really felt Hiroshi’s sense of alienation, which stemmed from not speaking English and not understanding American customs. ESL was a life-saver for him, and for many kids in our communities. To that end, today’s post delves a little deeper into that aspect of the story.

As luck would have it, two of our very own EmuDebuts authors are ESL teachers. Natalie Dias Lorenzi, the author of FLYING THE DRAGON, was an elementary classroom teacher for nine years before deciding to specialize in English language acquisition. Melanie Crowder, whose debut PARCHED comes out with Houghton Mifflin Harcourt in 2013, has been a Colorado educator for over ten years and thinks of teaching ESL as a pay-it-forward opportunity for the gift of bilingualism that she was given in elementary school.

What inspired you to teach ESL classes?

Melanie: Over half of the students in my elementary school are learning English. It is a huge area of need, and the most rewarding teaching job I’ve ever had.

Natalie: I’d been an elementary classroom teacher for eight years in multicultural schools in Virginia, Italy and Japan, and I loved working with kids from all over the globe. When I came back from living overseas, I taught at a school where the vast majority of students were monolingual English speakers. They were lovely to work with, but I really missed teaching ESL students. It’s an amazing privilege to witness their growth as they learn to speak English and gain confidence during their first months in this country.

Are there different teaching techniques you employ for working with ESL students versus teaching kids whose first language is English? Do you use different approaches for building rapport?

Melanie: Absolutely. There is so much that we take for granted as native English speakers. Little things that we have accepted and absorbed over the years that can be really confusing to someone who is first learning the language.

The most important thing to remember is that inside the mind of that student who hasn’t said a word for weeks, an enormous amount of learning is taking place. Be patient, and try to find ways for them to make meaningful contributions every day. 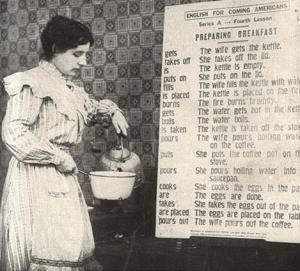 ESL instruction has come a long way since materials such as this poster were offered to immigrants in 1918! (Photo from the US public domain, originally published in National Geographic)

Natalie: Paradoxically, building rapport is so important, yet difficult when two people don’t share a common language. Teachers in the US tend to be much more casual in class compared with their counterparts in other countries. Just like Hiroshi’s teacher, Mr. Jacobs, in Flying the Dragon, American teachers might give students a “high five” to encourage them, or sit on the carpet with students during a classroom meeting. For many of my newly-arrived ESL students, this atmosphere takes some getting used to. I try to be cognizant of that, because while this way of relating to students is meant to help them feel more comfortable, it often has the opposite effect—students can be more stressed at first because they don’t know how to react when their teachers joke with them or give them a hug. I give newcomers time to observe how other students act around teachers before I start offering them high-fives!

As far as teaching techniques, I try to make everything as visual and active as possible. For example, I had a group of 5th grade newcomers who were learning about multiple meaning words. They knew what the bark of a dog was, but I couldn’t explain what tree bark was; they kept thinking it was the trunk. So we went outside and I showed them—we peeled a small piece of bark from a tree in the school yard. Their eyes lit up and they told me the word for tree bark in their home languages.

One of the more endearing aspects of this book was Skye’s special “English tips”. How big a role do you believe slang should play in ESL classes?

Natalie: Slang is an important part of learning any language, because it helps develop the language that kids use on the playground and after school with friends. I do introduce my ESL students to American idioms—not as a separate lesson, but when it comes up in books they read or in the things they hear in the hallways. They often don’t feel comfortable asking their peers what something means, but they will ask me. They love sharing versions of American idioms that exist in their own languages. For example, “talking behind someone’s back” in the US is the equivalent to “talking behind someone’s shoulders” in Italy.

What can mainstream teachers and/or librarians do to help ESL students thrive? (Besides making lovely stories such as Flying the Dragon available to them :))

Melanie: The biggest thing is to create a culture of inclusion in the classroom, to make school a place where differences are celebrated. This can be so difficult in today’s classroom, but a little bit of empathy goes a long way.

Natalie: Most teachers are friendly and open with ESL students—lots of smiles and non-verbal signs of encouragement. They also know that ESL students need lots of visuals and modeling of what they need to do. The best way to help ESL students thrive, however, is to give them tasks that they can actually do, and hold them accountable for completing those learning tasks. When I was a classroom teacher, I was guilty of letting ESL students slide with assignments because I knew they were going through a tough transition, and I didn’t want to add to their burden. When I would give a test to the rest of the class, I would tell my ESL student to skip certain questions that I thought would be too hard for them. Big mistake! All kids want to show teachers what they know and be proud of their accomplishments.

It’s fitting that we end this interview with a final note from Natalie about her ESL learners:

They clear hurdles that would fell many adults, myself included. My novel, Flying the Dragon, is dedicated to my students:

To all of the Hiroshis and Skyes who have ever walked through my classroom door. Your strength and resilience never cease to amaze me.

Thanks Natalie and Melanie!

BTW, A teaching guide for FLYING THE DRAGON will be available later this summer. Check out Natalie’s website.

Natalie Dias Lorenzi is a learner of languages, and speaks Italian fluently along with a smattering of German and Japanese.  Her Italian husband speaks English as a second language, and their three children are bilingual speakers of English and Italian. This comes in handy when Natalie wants to say things to her kids in public like, “If you don’t do as I say within the next three seconds, there will be no ice cream after dinner.” She says this (and other variations on that theme) in English while in Italy, and in Italian while in the US.

Tagged as culture, English as a second language, ESL, teaching