Well, friends, it’s February now…which I think means that 2012 is truly, officially over. Best-of lists have been made, many literary awards covering the last year have been handed out, and we EMUs heartily congratulate our fellow authors who’ve been honored (including an impressive slew of EMU Emeriti!).

And yet, we can’t help thinking back on our favorite reads of the year—the ones that we couldn’t put down, the ones that made us swoon. The ones that, months later, we keep recommending to the kids (OK, and grown-ups) in our lives, even if they weren’t mega-best sellers or fancy award winners.

I asked a few fellow EMUs to share their favorite books that were published in 2012, focusing on titles that may have flown under the radar a little bit—and of course, they came through with enthusiasm. Looks like everyone’s TBR pile is about to get a little taller…

I loved The FitzOsbornes at War, the third in a trilogy by Michelle Cooper (Knopf). A sort of alternative history of England in the second world war, the book is refreshingly sophisticated, well written, and meticulously and thoroughly researched. While not exactly ignored in the world of children’s literature, it’s one I felt deserved more attention than some of the top sellers.

My favorite read of 2012 was a picture book—The Iciest, Diciest, Scariest Sled Ride Ever! by Rebecca Rule (my mum) & Jennifer Thermes (Islandport Press). What happens when Lizzie, Patty P, Patty H, the Lapierre brothers, and even Chipper the dog decide to haul the long travois sled all the way up the big hill and ride it down?

I will go with Little Dog, Lost by Marion Dane Bauer (Atheneum). It’s so sad. But it’s so sweet. On so many different levels. It’s such a moving look at loneliness and longing and love. And the writing? Exemplary. 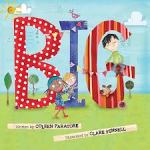 Kids always want to be “bigger,” and adults tell children “you can do that when you’re bigger,” but there are plenty of ways little ones can be “big” in a different and much more important sense of the word. This empowering and inspiring book shows how even little children can accomplish some pretty big ideas—like being responsible for themselves and caring for others—and it serves as a gentle reminder to adult readers as well. The illustrations are bright and fun, and they enhance the text beautifully. This is definitely one of my favorite picture books of the year.

And if I can add one more, I’d say As The Crow Flies by Sheila Keenan, illustrated by Kevin Duggan (Feiwel & Friends). This nonfiction picture book about crows is the book I was planning to write next, so I was angry and disappointed when I first saw that someone had beaten me to it. Once I saw it, though, I couldn’t be angry or disappointed anymore. It’s true to my idea and exactly what I wanted to accomplish, and it’s executed so, so well. I’m just happy to see it out in the world. Beautiful art, beautiful text, beautiful subject.

In middle grade, I adored Remarkable by Lizzie K. Foley (Dial). Clever, quirky, and often just downright hilarious, I think that any shelf containing Roald Dahl or Lemony Snicket books can’t be considered complete without it. Really, I defy any reader not to be charmed by this book—it has a pirate character named Captain Rojo Herring, for heaven’s sake.

And in YA, I loved Fair Coin by E.C. Myers (Pyr). Featuring wonderfully believable teen characters and a just-freaky-enough sci-fi concept involving parallel universes, I couldn’t put this book down. It stands alone, but now a sequel, Quantum Coin, is out, too!

So, blog readers, have you read any of our picks? Or do you have any under-the-radar recommendations of your own? We’d love to hear about them in the comments!