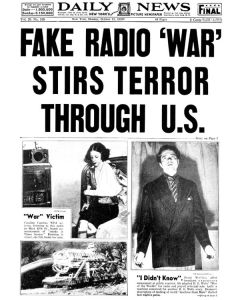 Picture this: your family has just returned home from a nice dinner out and gathers around the television a few minutes after America’s Got Talent begins. You are soon all enjoying the acts and discussing which performers should advance . . . when suddenly the program is interrupted by NBC Nightly News anchor, Brian Williams.

His message: America is under attack, by aliens! Would you believe him? I would. It’s the Nightly News!

In RADIO GIRL, Carol Brendler takes her readers back to a time when families gathered around a household radio rather than a yet-to-be-invented television—a time that many of our parents and grandparents can remember (it wasn’t that long ago). Their childhood evenings were often spent listening intently to not only critical news stories from around the globe, but also dramatizations performed by actors who brought fictional stories to life with vivid descriptions, believable character voices, and eerily accurate sound effects.

It is therefore understandable how true stories and fictional productions—sharing the same, limited airspace—had the potential of causing confusion. 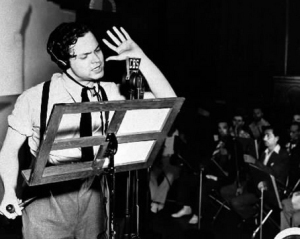 Never was there a more exciting time to be tuned into the radio than on the evening of October 30, 1938, when mass chaos was created by Orson Welles and the Mercury Theater company. Their radio broadcast on this particular night was an adaptation of a popular novel, The War of the Worlds, and even though it was clearly introduced as such, the production was so believable that thousands of people—who had somehow missed the narrator’s brief introduction—called radio stations, newspapers, and even the police, desperate for information about the alien invasion that was being broadcast live via the radio.

People ran out of their homes and pounded on their neighbors’ doors to warn them, families loaded up cars and headed out of town in droves, makeshift gas masks were thrown over terrified faces (the aliens, you see, were using poisonous gas), and women went into early labor. Miscarriages and even stress-induced deaths were blamed on the broadcast. It was madness, people. Madness!

But what exactly made the broadcast so darn believable? What was it about this time in our country’s history that created such a jumpy, easily-shaken atmosphere? Radio Girl holds these answers and many more entertaining and insightful tidbits about this fascinating era, all while following the daily life of fourteen-year-old Cece Maloney whose dreams of becoming a radio star put her right in the center of the pandemonium that’s stirred up by The War of the Worlds broadcast—and only Cece knows what’s really going on when her neighborhood goes nuts.

Want to read the book for yourself? You can now find Radio Girl in bookstores or online. You can also listen to the original radio broadcast here, and watch a dumbfounded Orson Welles try to answer the accusatory questions of angry reporters—the day following the broadcast—here. Enjoy!

And congratulations to the fabulous Carol Brendler on the launch of her first novel!

Amy Finnegan writes Young Adult novels and is a host at BookshopTalk.com. Her debut novel, NOT IN THE SCRIPT, will be published by Bloomsbury, Fall 2014. You can follow Amy on Twitter @ajfinnegan, and Facebook (Amy Finnegan, Author). She is represented by Erin Murphy.

9 responses to “WHEN ALIENS ATTACK!!”