A Fan Letter to Readers

I know you probably hear this a lot, but I’m seriously your biggest fan! I’ve wanted to meet you for over a decade, and now that it’s finally happened, I’m totally FREAKING OUT!

You know that one day when you said how much you loved my book? Oh . . . my . . . gosh. My heart was beating a million times a minute. I keep wondering if you’re all secretly related to me, or if maybe my mother has made a hundred or so sock-puppet Goodreads accounts just so she can encourage me to keep writing.

But then you tell me you’re from the Philippines, or Texas, or Canada, or London, or Slovenia, or that gorgeous African island of Mauritius, and I just can’t wrap my head around it! And never in a million years did I think that even one of the 1.2 billion people in India would even know I existed, let alone be excited to read a novel I wrote! Like . . . what?!

You do realize that I grew up in a small town of about 5,000 people, right? That the most outrageous thing I ever dreamed of was going to Hawaii one day? And when that happened at sixteen (my first plane ride), I thought, “Wow. That’s about as good as life can get.”

But then I decided to be a writer. And I hoped people would actually like what I wrote, enough to even pay money for it. But I soon learned that this dream was, as some teenagers today might have told me, totes cray cray.

I had no clue whatsoever how much work would be involved, or how many times I would get my heart broken, or feel like a complete and utter idiot for even thinking I could become a published author.

But you, super-awesome readers, have changed everything. You’ve made me believe that all of the hard work and heartache was not only worth it, but have given me so much HAPPINESS that I’m jumping up and down with jazz hands in the air, wanting to do it all over again!

So sign me up for even more writer’s block, and self-doubt, and pulling my hair out! Go ahead and toss in some of that heartache and rejection! That’s right!

This time I’m well prepared for the crazy/awful/awesome pathway to publication, because I now know who’s waiting for me at the end of it.

All of my fan-girling love and deepest gratitude,

Amy Finnegan, Published author of NOT IN THE SCRIPT, Bloomsbury 2014 (OMG!!!) 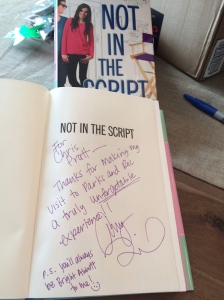 Just one of many amazing people I signed a book for in the past month! #Star-Lord

Gabrielle from New Hampshire. The first reader I know of to spy it & buy it in the wild!

Amy Finnegan writes her own stories because she enjoys falling in love over and over again, and thinks everyone deserves a happy ending. She likes to travel the world—usually to locations where her favorite books take place—and owes her unquenchable thirst for reading to Jane Austen and J.K. Rowling. Her debut novel, NOT IN THE SCRIPT, came about after hearing several years of behind-the-scenes stories from her industry veteran brother. She’s also been lucky enough to visit dozens of film sets and sit in on major productions such as Parks and Recreation and Parenthood. You can follow Amy on Twitter @ajfinnegan, Instagram: StrangerThanFictionWriter, or Facebook (Amy Finnegan, Author).

Tagged as Amy Finnegan, Not in the Script

16 responses to “A Fan Letter to Readers”