WHOSE Dog is the best?? 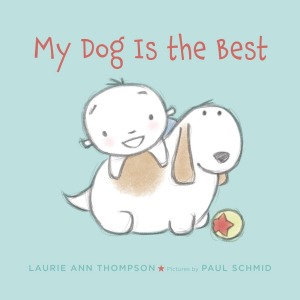 In Laurie Ann Thompson’s wonderful new release, My Dog is the Best, illustrated by Paul Schmid, a boy gives his reasons for why his dog is absolutely the best, in his world and in his heart. No doubt, the dog depicted in this delightful picture book is outstanding–and it got us all thinking about the pets who bless our lives, and why they, too, are the best!

Janet Fox, author of several titles for young readers, wanted you to know that HER dog is the best–because he loves his toys to pieces.

“This is my dog, Sable,” says author Rebecca VanSlyke. “Sable is the best because she is such a smart dog! She can do

many tricks, from the regular sit, down, stay tricks to things like ‘High Five,’ ‘Shake,’ ‘Roll over,’ ‘Be cute,’ and ‘Sit up.’ When she needs to go outside, she rings a bell that we keep by the back door.  She also plays the piano (a little Fisher-Price toy piano), says her prayers (putting her nose on her paws and waiting for her treat until I say, ‘Amen!’ and when I point my finger at her and say, ‘BANG!’ she falls over on her side and lies still. Plus she’s just so doggone cute!”

Donna Bowman Bratton tells us, “Here’s a picture of Sparky Malarky, our lovable shelter dog with super powers. Besides

incessant begging, which is both adorable and annoying, he can pierce the human soul by morphing his eyes from doggy-joy to pathetic tale of woe. He’s a master manipulator. And it works for him every time.”

“The cat is Bantam,” Tamara Ellis Smith explains. “The dog is Fundy.  Fundy is our 15 year old chocolate lab.  She is deaf and blind and, as you can see from the picture, her back legs are barely working anymore so we need this harness to help her get up to go outside.  Fundy is also easily agitated these days…she seems to go in and out of senility.  She gets confused and seems to not know where she is at times. Bantam, our six year old cat, is her best friend. Every time he comes in from being outside, he goes straight to Fundy to say hello.  He weaves his body in and around hers, rubs her face with his nose, purrs so that that she can feel the rumble.  He takes care of her, plain and simple.  It truly seems like that.  And he has gotten more vigilant about it, the older she has gotten.”

Christine Hayes wants you to meet her dog, too. “Here’s our funny Wheaten Terrier, Chewie (short for Chewbacca). We chose him because he doesn’t shed (allergies) and because he’s like a big teddy bear. He also looks a lot like the family dog, Cotton, that I adored growing up. Plus he keeps me company during the day. I may have been known to carry on conversations with him from time to time, and he never argues or talks back!”

Megan Morrison offers up this entry into the world’s best dog. “This is Jake, my brother’s dog, and the best loved dog I’ve ever

known. My brother took the Jake dog to work every day. They were never apart for long. Jake was a big bullmastiff and the sweetest, gentlest animal. He loved children. He loved everybody – and everybody loved him. He listened to everything my brother said; they were like their own pack of two. Jake passed away last year, and it was rough for the whole family. He really was the best.” How could anyone resist THIS FACE?

Penny Parker Klostermann admits that she defected to cats in her adult years–but she’s no stranger to beloved pups. She sent a picture of a dog she had in childhood that she’s never forgotten. “Tippy had the privilege of being the first puppy to live with the Parker girls and they all agreed that he was the BEST dog ever. He was named for the white tip on his tail. As you can see, there were four girls to love on him, so Tippy never lacked for petting or playmates.”

Maria Gianferrari makes no excuses for believing her dog is the most awesome ever. “Becca is the best! She’s a Dixie Chick, 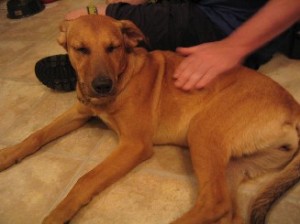 a rescue dog from Chattanooga, Tennessee. We’re so lucky and grateful that kind-hearted souls rescued her after she was dumped on the side of a highway! She was meant to be in our family. We had a friend who was about to have a baby girl, and I was discussing some possible names with my daughter who was then four. And the name “Rebecca” popped into my head. The next day, I went on Petfinder and found our Rebecca. I just fell in love with her sweet face in this photo, and knew she’d be the perfect dog for us. She was transported on a rescue truck to NH, where we picked her up. That was in August 2006, and she’s been the best family member, writing companion, and dog sister to Anya, who’s an only child. She’s playful, yet mellow, and so very tolerant. And she’s doesn’t bark often, only when alerting us to someone at the door. She’s definitely the best dog in the universe!!”

As for me, I have THREE dogs, and couldn’t begin to pick which one is the best. Instead, I’ll just volunteer them as adorable, and much-loved. Here are two of them, the tiniest (Frodo) and the hugest (Luke) making the best of a warm spring afternoon on our front porch.

Finally, you may be wondering what Laurie’s dog thinks of her mother’s new masterpiece. Laurie says, “My dog, Prim, loves the title, but wonders why the dog in the book looks nothing like her.”

So, is your dog actually the best? Tell us all about that special pup in a comment, and get a chance to win a giveaway! To purchase this outstanding book, check out these links:

Susan Vaught is the author of many books for young adults, such as TRIGGER, BIG FAT MANIFESTO, and FREAKS LIKE US. Her debut novel for middle-grade readers, FOOTER DAVIS PROBABLY IS CRAZY, published by Simon & Schuster, hit the shelves in March, 2015. Please visit Susan at her website, follow her on Twitter, and like her Facebook page.

6 responses to “WHOSE Dog is the best??”