The Things We Carry

This week we are thrilled to celebrate the launch of Tamara Ellis Smith’s incredible novel, ANOTHER KIND OF HURRICANE:

“A hurricane, a tragic death, two boys, one marble. How they intertwine is at the heart of this beautiful, poignant book. When ten-year-old Zavion loses his home in Hurricane Katrina, he and his father are forced to flee to Baton Rouge. And when Henry, a ten-year-old boy in northern Vermont, tragically loses his best friend, Wayne, he flees to ravaged New Orleans to help with hurricane relief efforts—and to search for a marble that was in the pocket of a pair of jeans donated to the Red Cross.

“Rich with imagery and crackling with hope, this is the unforgettable story of how lives connect in unexpected, even magical, ways.”

Central to Tamara’s story is one small marble, an object with strong emotional ties for Henry. Several of the authors here at EMU’s Debuts have objects that are dear to their hearts, and were willing to share their stories.

Janet Fox: “I wear a bracelet that my mother-in-law wore constantly; since she gave it up, it hasn’t been off my wrist. It reminds me of her (she passed away two years ago), and when I first put it on it was a talisman for my son’s success, too. I actually have such a superstition about it that it never comes off. Especially since things have been looking up from the moment I put it on.” 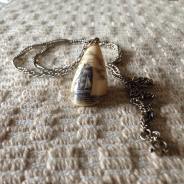 Elaine Vickers: “I have a necklace with a shark tooth pendant my grandmother gave me before she passed away. I still miss her every day and try to follow her example of kindness–but she could also be tough when she needed to be! Whenever I’m facing a situation that scares me a little, I wear the shark tooth necklace to help me be fierce and fearless.”

Maria Gianferrari: “I have two objects that hold special meaning, and they’re both from my paternal grandmother, my Nonna, who was born in Italy . The first is her pasta maker. I haven’t used it in such a long time, but I have fond memories of cranking the handle, and as it clicked and clicked, watching the dough ooze through the molds in wide-shaped noodles. She also used to roll the dough flat in it, and let me cut it into rows with her pasta wheel, then squares for making tortellini. The second one goes with it—it’s her cheese grater, with its wooden bottom for catching the shavings of delicious parmigiano-reggiano cheese!”

Megan Morrison: “I really had to think about this. I have more objects than I need, but when I tried to think of one that has genuine emotional significance, I was stumped. Fin 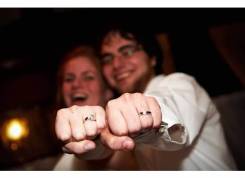 ally, I realized that the only object I would grieve if it were lost is the one I have on my person at all times: my wedding ring. My mother gave me the engagement ring as a 25th-birthday gift, and my husband knew it was the only one I wanted to wear forever, so he put a diamond in it and proposed. My sister’s godfather, a jeweler, crafted a thin wedding band to fit around the square setting, and soldered them together. It’s special to me not only because it represents my marriage, but because so much love and care went into it.”

Christine Hayes: “My mom’s parents divorced when she was about five years old. She was never close with her dad,

especially after she and my grandmother moved across the country from New York, eventually settling in California. I met my Grandpa Max only once, when I was 19. He was a mystery to me, very formal, and not much of a people person. He just didn’t know how to be a grandpa–or a dad, I guess. But I’m glad I got to meet him, because it helped me to understand my mom better, to see her in a new light. Max took us to see an old family cemetery in upstate New York, hidden away in a grove of trees. It was beautiful. I hope to go back someday, if I can ever find it again. When my mom passed away in 2010, she didn’t have many possessions–certainly nothing of great monetary value. But her grandmother had bronzed a pair of Mom’s baby shoes and mounted them on a plaque with a photo of Mom with her father. I keep it in a place of honor in my office. It reminds me that family is precious, and to never, ever take it for granted.” 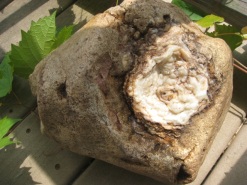 Mylisa’s rose rock is the stuff of legends

Mylisa Larsen: “I have a big, old rock that I still move from house to house because it reminds me of my grandpa. He lived out on a ranch and when I was about ten, my cousins and I hiked out to this dry reservoir bed that all the grownups had talked about but that sort of had a tinge of legend about it—did it really exist? We walked and walked and walked and decided that they’d made it up but then went over one more hill and there it was.  We were mucking about turning over rocks and found a red rock that had a swirl of white rock in it that looked like a rose. We took turns lugging the thing all the way back to our grandparents house. When we got there, all sweaty and hot but excited about our momentous excursion and carrying the proof that we had really been there, my grandpa treated us like adventurers and admired our rock with proper awe and put it in a special place in his flowerbed so we could see it whenever we visited. The rest of the adults were kind of like, ‘Ho hum, a rock, that’s nice dear.’ But Grandpa got it. So I keep the rock but it’s not really about the rock, it’s about how my grandpa make me feel.”

What objects hold special meaning for you? Leave a comment for your chance to win a signed copy of ANOTHER KIND OF HURRICANE, plus a lucky marble keepsake!

Purchase a copy of Tamara’s book through Indiebound, Powell’s, Barnes & Noble, or Amazon.

24 responses to “The Things We Carry”