Another Kind of Hurricane – The Movie!

Congratulations to Adam Shaughnessy on his debut novel THE INCREDIBLY TRUE STORY OF THE UNBELIEVABLE FIB heading out into the world!  So wonderful for us all!  And, specifically, wonderful for BRENDA who wins a copy of the novel!

I was recently fortunate enough to be asked by Marshal Zeringue to be contribute to the blog, MY BOOK, THE MOVIE. It was such a great exercise for so many reasons, the biggest one, perhaps, being that I had to imagine my story in a completely different way. Visually. It was very cool. And so I thought I would repost here. Thanks to Marshal for letting me do just that! 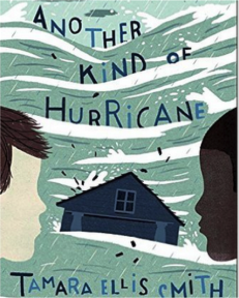 I love color and shape, I love picture book illustrations, and I love movies – but I don’t think in images at all. I think in words, and, more specifically in sounds and rhythms and energy. That said, I have definitely imagined Another Kind of Hurricane as a movie – Oh that would be so exciting! – but I have envisioned actors based on their energies more than anything. I love strong and quirky woven together. A few people have been in my mind from the get-go who bring that mix to their work.

I see Alfre Woodard as Ms. Cyn. I think I first saw her way back when in Passion Fish and have loved her ever since. She is fierce and funny, and has a sense of wisdom about her, a sense of knowing the truth of the matter.

I see Sam Rockwell as Jake. He is brilliant in Way Way Back – a bit of a smart-ass, disorganized and unwound like an empty spool attached to a pile of knotted thread. But really, deep down, he is solid in his beliefs and enormously big-hearted.

I imagine Chiwetel Ejiofer as Ben. I fell in love with him in Love Actually and will see anything he is in. He, too, is fierce and has an energy range that would allow him, I think, to dig into all of Ben’s nuances.

I have always thought of Catherine Keener as Henry’s mom, Eliza. I loved her in Walking and Talking, as well as Lovely and Amazing. She plays a great mom and she has a disheveled beauty, insid

e and out. And Toni Collette would be fantastic as Wayne’s mom, Annie. From the time I saw her in Muriel’s Wedding I have been obsessed with her. She, like Catherine, plays a mean mom, and she just has this essence that is authentic and, for me anyway, mesmerizing. I adore her. Like Chiwetel, I actively seek Catherine and Toni out and will watch them in whatever I can find.

I’ve thought about some of the other main characters in Hurricane too. These took me a little longer to land on, but I can imagine Nimrat Kauer as Cora and Ariadne Gil as Margarita. I als

o see Jeffrey Wright as Tavius, Don Cheadle as Isaac and Jordan Peele as Skeet. What a dynamic trio!

Oddly, though, my two main characters have eluded me more than anyone else. I have gone around and around who could play Zavion and Henry, and truthfully, if Hurricane was really going to be made into a movie, and I had some say in who would get cast, I would ask that we go search for some unknown boys – kids that haven’t necessarily done any TV work or movies, kids whose parents are not necessari

ly connected to the industry, but kids who have that certain energy. Probably kids who, in their actual lives, have experienced a tragedy or who have that unusual older-than-their-years feeling about them – like Alex Shaffer, who was brilliant in Win Win, but had never acted before. That said, if I had to pick right now I would probably pick Marcus Scribner to play Zavion. I like him in Blackish and I think he knows how to play obsessed and focused. And I’d probably pick Liam James to play Henry. He was in Way Way Back and pulls off awkward and inarticulate very well. Both boys have an off-the-beaten-path quality as well as a sense of depth, I think.

Who do you think would play the lead roles in your book, the movie? Who would star in your favorite books-turned-big-screen? Such a fun thing to imagine, especially for someone so NOT visually minded…

Tamara Ellis Smith writes middle grade fiction and picture books. She graduated in 2007 from Vermont College of Fine Art’s MFA program in Writing for Children and Young Adults. Tam’s debut middle grade novel, Another Kind of Hurricane was published by Schwartz & Wade/Random House in July 2015. She is represented by the incredible Erin Murphy of Erin Murphy Literary Agency, and can be found on the web at www.tamaraellissmith.com and on Twitter @tsesmith.

Tagged as ANOTHER KIND OF HURRICANE, Tamara Ellis Smith

8 responses to “Another Kind of Hurricane – The Movie!”