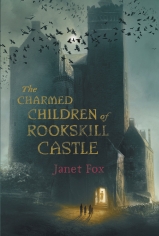 The Charmed Children of Rookskill Castle by Janet Fox is a book I fell in love with on page one and could not put down until I read the very last word. I, however, was not the first to fall in love with this read-with-the-lights-on mystery. That honor goes to Janet Fox’s agent, Erin Murphy of Erin Murphy Literary Agency (EMLA). I had the privilege of talking with Erin about her first impressions of this unforgettable story. But first, a bit about the Charmed Children of Rookskill Castle.

“Keep calm and carry on.”

That’s what Katherine Bateson’s father told her, and that’s what she’s trying to do: when her father goes off to the war, when her mother sends Kat and her brother and sister away from London to escape the incessant bombing, even when the children arrive at Rookskill Castle, an ancient, crumbling manor on the misty Scottish highlands.

But it’s hard to keep calm in the strange castle that seems haunted by ghosts or worse. What’s making those terrifying screeches and groans at night? Why do the castle’s walls seem to have a mind of their own? And why do people seem to mysteriously appear and disappear?

Kat believes she knows the answer: Lady Eleanor, who rules Rookskill Castle, is harboring a Nazi spy. But when her classmates begin to vanish, one by one, Kat must uncover the truth about what the castle actually harbors—and who Lady Eleanor really is—before it’s too late.

Now, to my chat with Erin.

When you first read this novel, what was your initial impression?

Erin: Something like, “My God, this woman can write!” WWII-era England is a great sweet spot for me so far as pleasure-reading, so when Janet first queried me and described this project (then called Chatelaine), I literally wrote back, “I want to read it right this minute.” When I did read it, it didn’t just meet my expectations, it far exceeded them.

Of all the characters in The Charmed Children of Rookskill Castle, who do you most identify with?

Erin: Kat, of course. Oh, do I identify with the need to balance left-brain and right-brain thinking—although the older I get, the more I favor the intuitive and imaginative. Plus, she’s an eldest child, always feeling responsible.

I was wonderfully surprised at Janet’s ability to seamlessly blend mystery, suspense and fantasy on the very real backdrop of WWII. How do you feel about the blended genres?

Erin: I absolutely adore them. Speaking of imaginative things, I think some of the most imaginative books I’ve read have been blended genres. There’s just something about mashups that brings out both the comfortingly familiar and the wonderfully surprising.

Finish this sentence: You must read The Charmed Children of Rookskill Castle because …

Erin: …it will sweep you away to another time and place and you will be satisfied until the very last page!

Your favorite mystery as a kid?

Erin: I can’t pick just one! I was a voracious mystery reader, especially on summer vacation, when I’d devour every book by a mystery author—the Trixie Belden books, and Nancy Drew, and the Hardy Boys, and Agatha Christie, and Sherlock Holmes….Right now I’m exceptionally busy and stretched thin as I prepare to relocate across the country, and the reading I reach for? Mystery series. Even now, that is escapist comfort reading to me.

And since no good interview would be complete without a surprise question…What’s the oddest job you have ever had?

Erin: That’s a funny non-sequitur of a question! I guess it was the brief period when I was a Secret Diner, eating at various locations of a particular chain restaurant and turning in reports on the food quality, service, and cleanliness. But all I got paid was free meals.

Huge thanks to agent and secret diner extraordinaire, Erin Murphy, for sharing her thoughts on Janet’s wonderful story. Charmed Children of Rooksill Castle is at a bookstore or library near you. Today!

Elly Swartz is a middle-grade author whose debut novel, FINDING PERFECT, comes out October, 18, 2016 (FSG). FINDING PERFECT is a middle grade story about a twelve-year-old girl named Molly, friendship, family, betrayal, OCD, and a slam poetry competition that will determine everything. Elly lives in Brookline, Massachusetts with her husband, two sons and beagle named Lucy. If you want to connect with Elly or learn more about what she’s working on next, you can find her at www.ellyswartz.com, on Twitter @ellyswartz or Facebook.