Janet Fox Adds to the Tradition of Scottish Magic

From the Loch Ness monster to King Arthur’s son Mordred, Scotland is full of myths and magic. Selkies, the creatures that live as seals in the sea but shed their skin to become human on land, have been sighted on the Scottish shores for eons. Tales abound of babies stolen from their cradles and replaced by fairies or changlings. At Clava Cairns, set in a peaceful grove of trees, are the remains of three stone burial mounds, constructed 4,000 years ago with a passageway that the sun illuminates with each winter solstice. That is certainly some kind of magic. And of course, perhaps the Scottish magic closest to our hearts, as writers of children’s fiction, is that Scotland is the location of Hogwarts School of Witchcraft and Wizardry and the magical village of Hogsmeade.

Now with the publication of THE CHARMED CHILDREN OF ROOKSKILL CASTLE Janet Fox has given us a new world of Scottish Magic to explore. It’s World War II – Katherine Bateson and her younger brother and sister are sent to Scotland from London to escape the bombings. A school to remove children from the war torn cities has been set up in Rookskill Castle, an ancient, crumbling manor on the misty Scottish highlands. From the moment Kat and her siblings arrive, Kat senses something isn’t quite right.

What can Kat do about the nightmares that seem so real? Why do the castle’s walls and halls seem to move as soon as you walk past them? What is happening to their teacher who is changing before their eyes? Kat’s younger brother doesn’t care—he just wants to learn swordplay and other knightly skills. Her younger sister is sure the castle is full of magic. Even though Kat’s aunt sent her on this voyage with a chatelaine of magical charms, math wiz, Kat is sure there is a logical but possibly sinister explanation.

The wonderful thing about this story is that as readers we are solidly in Kat’s head – so unsure about what is happening around her. Is Lady Eleanor, who runs Rookskill Castle, harboring a Nazi spy or do magic and ghosts rule the whole castle? When her classmates begin to vanish, one by one, Kat is pushed to uncover the truth about what is actually going on—and who Lady Eleanor really is—before it’s too late. THE CHARMED CHILDREN OF ROOKSKILL CASTLE is a rich historic fiction, full of wonderful characters, that adds to the tradition of Scottish magic. The magic in this story is so well done that I was surprised to find it wasn’t based on centuries of existing myth. Janet saw a picture on Facebook of a ring of charms and their magical properties were born. This is one of those “can’t put it down” books that I’ll save for rereading over the years. 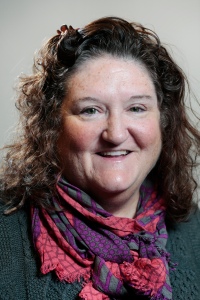 Darcey Rosenblatt’s debut novel will be published by Henry Holt/MacMillan in spring of 2017. Her story is historic fiction, telling the story of a 12-year old Iranian boy sent to fight in the Iran Iraq war in 1982. With her critique group she runs the Better Books Workshop – an annual small deep craft conference held in Northern California. She lives in the San Francisco Bay Area with her fabulous husband and perfect daughter, some fish, a cat and the best dog in the world. By day she is an environmental planner and when time permits she paints and costumes for a 5-8 year old theater. darcomatic on Instagram and darcey_r on twitter.