You get to keep only one. That’s right. One.

Wait. We’re not talking about a *real* puppy. We’re talking about YOUR BOOK. The others involved will be your trusty agent and editor.

But back to puppies.

Bit by bit, the right puppy will emerge. It will distinguish itself from its littermates. It will mature, develop manners, learn not to jump on guests. Its essential sense of self will be cultivated, its strengths enhanced. It will be groomed until it shines like a shiny, shiny show dog.

(Dog geek alert: I’m pretty sure this is an English Toy Spaniel. The muzzle looks too pushed-in for a Cavalier King Charles Spaniel. Feel free to weigh in.)

It will be ready to strut its stuff in front of the whole world and make you proud.

And your puppy-love will deepen into true love.

Remember, none of this happens by accident. Without long walks, lots of attention, some sleepless nights, and consistent discipline, your book-puppy will never become all it’s meant to be.

And it’s meant to be nothing less than a champion.

I look back fondly at my many versions of BABYMOON. They still have all their puppyish charm for me. The earliest is spare yet lyrical. Later ones are more developed, with complete sentences and a more varied rhythm. The final, more nuanced version is quite different from its siblings, and yet it bears a strong resemblance to all of them. I guess you could say it’s the pick of the litter. 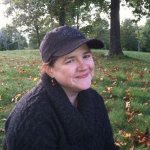 I write for young people and live to make kids laugh. My debut picture book, BABYMOON, is coming from Candlewick Press. Come hang out with me on Twitter @hayleybwrites, Facebook, or in the meadow: http://hayleybarrettwrites.wordpress.com

17 responses to “Loving Your Literary Litter”