Even now, I can still clearly see the view from my windshield as I drove along leafy, tree-lined streets with my three-year-old boy and his baby brother strapped into their car seats, slowly making our way home from the library.

As soon as the words left my lips, I felt a twitch inside.  A pang. A thud of a forgotten memory, the whisper of a long lost dream.

A dream, quieted by the demands of life. School. Journalism Career. Raising Littles.

But, in that moment, after an afternoon surrounded by books, I couldn’t deny I heard it. It felt like an untied shoelace.

You can be anything you want. All you have to do is follow your dreams. 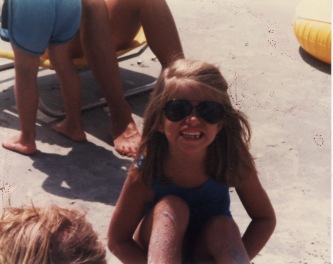 Anna Crowley Redding, Age 10. That little toothless girl had big dreams (and even bigger sunglasses. Some things just do not change.)

For as long as I can remember, my dream was to be a children’s book author. At 10, I used to a carry a wire bound notebook around with me, filling  the pages with a murder mystery. In my teens, I wrote picture books and poetry. All along, I collected children’s books. Even in my 20’s, my father still added to my collection every year during the holidays. I loved it!

But the dream of actually writing for children slowly, mindlessly, invisibly drifted to the back burner––until that drive home from the library. Until the talk about following one’s dreams. And I realized that if I want my boys to follow their dreams, I had better get busy leading by example.

The next morning, I woke up earlier, made coffee, climbed into a chair in front of my computer, and started. And it felt––ridiculous. I mean, truly, it felt absurd, silly, and small. How could I justify it? The boys, the nursing, the laundry, the schedule, the money, no assurance it would ever go anywhere at all, and on and on and on.

But the next morning, it felt less ridiculous. Defending the time to write came easier, with practice.

And that twitch, that pang, that thud of a long forgotten memory became a battle cry, day in and day out. Something that could only be calmed with writing.

I joined SCBWI and prepared to attend my first conference. Business cards, sharpened pencils, and fresh paper packed into my bag, I walked through the doors with big expectations. After two days of workshops, seminars, and talking to other writers, it hit me: I was standing at the bottom of an enormous mountain. And I had not a single clue as to how to climb it.

Until the next morning, that battle cry woke me up and I returned to the computer. The mornings added up. So did meetings with my invaluable critique group. Countless revisions, workshops, seminars, false starts, failed attempts to quit . . . every morning, the battle cry came for me. And I answered.

“Hey,” I said. “I’m about to run into the school for a parent teacher conference. I can talk for five minutes now or longer this afternoon.”

“Five minutes should be enough,” she said, “to tell you we have an offer.”

All I remember after that is crying and feeling extreme gratitude, the kind of gratitude that’s built morning after morning, setback after setback, word by word, sentence by sentence, and draft by draft.

Maybe you, too, are in the throes of raising amazing little people, juggling the demands of an intense career, or fending off the terror of trying to make ends meet (or all three at once.) And maybe you, too, feel that twitch, that pang, or hear that thud of a memory long forgotten.

Tomorrow morning, if you wake up and get started, imagine me there with you, cheering you on . . . no matter how ridiculous it feels. Because actually what you are doing is quite brave.

P.S. As a practical matter, here are some things I did that made all the difference: 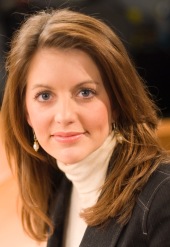 Before diving into the deep end of writing for children, Anna Crowley Redding’s first career was as an Emmy-award winning investigative television reporter, anchor, and journalist. The recipient of multiple Edward R. Murrow awards and recognized by the Associated Press for her reporting, Redding now focuses her stealthy detective skills on digging up great stories for kids –– which, as it turns out, is her true passion.

Redding’s debut middle grade nonfiction GOOGLE IT! will be published by Feiwel and Friends in May 2018. Anna is represented by Ammi-Joan Paquette of Erin Murphy Literary Agency.