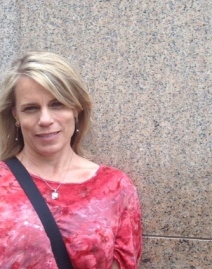 To say that Lindsey Lane loved reading when she was small would be an understatement. Her closet held more books and comics than clothes and always featured a pillowy place to sit. The words in books equaled worlds beyond her front door in Westfield, Massachusetts. The world she entered over and over again was Anna Sewell’s Black Beauty because it told the truth about love and cruelty—two impossible roommates in the human heart. This book, more than any other, inspired her to be a writer. With only a pen and an imagination, what a world a writer can create.

After she graduated from Hampshire College with a BA in Theatre Arts-Playwriting, Lindsey moved to Austin and started writing plays like the award winning The Miracle of Washing Dishes. Later, her inquiry into words and worlds led her to journalism where she interviewed death row inmates, cops and wayward millionaires for the Austin Chronicle and the Austin American Statesman.  When she wasn’t writing, she trained as a boxer and promoted the first all women’s boxing event to raise money for Austin Rape Crisis Center.

Lindsey received an MFA in Writing for Children and Young Adults from Vermont College of Fine Arts in 2010. At VCFA, she stretched into middle grade and young adult writing, including an honor-winning young adult short story. This degree helped her grow as a writer and speaker. In fact, Lindsey is a featured presenter at many schools where she gets kids (of all ages) excited about reading and writing.

To this day, Black Beauty is one of Lindsey’s favorite books and still informs her writing because, no matter what world she is building, she believes it is the heart of the character—that quixotic and diabolical heart—which draws the reader in and makes us laugh, cry, gasp and not put the book down. Speaking of hearts, Lindsey could not have written a word without the love and support of her daughter and their community of friends and family, near and far.