An Octet of Octopus Facts and Friends!

We continue to wrap our long, flexible arms around Ann Braden’s THE BENEFITS OF BEING AN OCTOPUS

in a giant, celebratory, Emu hug.

For my contribution to her launch festivities, I’ve pulled together an octet of informational tidbits about the cephalopodic creature that adorns Ann’s gorgeous cover.

1. Let’s talk about the OCTOPUS. That’s the catch-all name for one of about 300 species of soft-bodied, eight-limbed molluscs, order Octopoda, from the Greek for “eight foot.”

What’s that? You can’t see them? Of course you can’t, because the next captivating cephalopodic characteristic is:

Octopuses and other cephalopods have specialized cells called chromatophores beneath the surface of their skin. These cells contain sacs of liquid color, like ink-filled water balloons. As the cells expand or contract, the animal’s skin changes color. Specialized muscles under their skin—similar to ours that cause goosebumps—alter the animal’s texture. Chromatophores and specialized musculature make it possible for cephalopods to adapt their appearance, mirroring and mottling until they blend into their surroundings. Poof!

4. FREAKY-SMART INTELLIGENCE! (maybe don’t think about it too much)

In fact, due to their intelligence, octopuses are listed in the U.K. and other countries as experimental animals, which means surgery may not be performed on them without anesthesia, a protection is usually limited to vertebrates.

5. OCEANIC BEEN THERE, DONE THAT!

Every ocean is home to the octopus. The habitats each prefers vary from shallow tidal pools to deep-ocean abyssal plains. Their preferred water temperatures range from hydrothermal vent-hot to icy-cold. Sadly, no octopuses inhabit fresh water.

ABDOPUS (like octopus…with great abs) ACUEATUS, also known as “algae octopus,” the only “land” octopus. It lives on intertidal beaches and crawls along the sand from tide pool to tide pool in search of food. You have to see it to believe it, and remember, once you see it, you can’t unsee it. 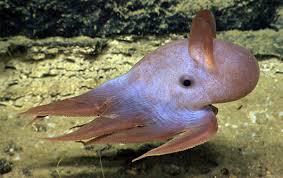 is more commonly known as the Dumbo octopus. I like the name “Grimpoteuthis” far better than “Dumbo,” but I get why this critter got it’s Disney-ish name. It flaps ear-like fins to propel itself, flying underwater like an animated elephant. It also has bright baby-blue eyes, just like—you guessed it!—Dumbo.

8. The TREMOCTOPUS, or the blanket octopus, sports rippling sheets of webbing stretched between its arms.

The blanket octopus is immune to the viciously venomous sting of the Portuguese man-o-war. Since the female blanket octopus is 4000 times larger than the male, she’s the one who collects and brandishes the marine hydrozoan’s whip-like tentacles, Scientists believe the octopuses employ the tentacles for offense and defense. Look out, Aquaman!

Now you know  THE BENEFITS OF BEING AN OCTOPUS. They’re capable, curious, color-transforming, consistency-copying, and altogether cool!

I write for young people and live to make kids laugh. My picture book BABYMOON, dreamily illustrated by Juana Martinez-Neal, celebrates the birth of a new family and will be published April 2, 2019 by Candlewick Press. WHAT MISS MITCHELL SAW, a narrative nonfiction picture book, is coming in fall 2019 from Simon & Schuster/Beach Lane Books and will be illustrated by Diana Sudyka. GIRL VS. SQUIRREL, a funny STEM-based picture book illustrated by Renée Andriani, is coming from Margaret Ferguson Books/Holiday House in spring 2020. I’m represented by Ammi-Joan Paquette.