The launch for Andrea Wang’s THE NIAN MONSTER continues with an interview with the book’s illustrator, Alina Chau! Scroll below to read about New Year celebrations and mythical monsters, and to see some stellar illustrations!

Jason Gallaher: Your illustrations for THE NIAN MONSTER are absolutely stunning! Can you describe your style and the materials used to create the illustrations?

Alina Chau: Thank you.  The Nian Monster illustration is mostly watercolor on paper, except the two pages about Nian’s legend. I use Photoshop to create the Chinese paper puppet look and some of the decorative elements on the flap, that looks like traditional Chinese paper cut art.  As for the style, since this is a Chinese New Year story, I use a design style that is influenced by traditional Chinese folk art and painting.  A lot of the New Year decorations in the book are inspired by the traditional decoration.  The feel and atmosphere of the New Year is very much drawn from my childhood memories in Hong Kong.  Chinese New Year was one of my favorite holidays as a kid.  Before the New Year, the market will be extra festive.  At home, everyone is busy preparing for the big new year dinner.  Chinese New Year dinner is kind of simliar to Thanksgiving here.  It’s an important evening for family to get together and give thanks and good wishes to each other.  Kids often get new clothes in red as a symbol of a new beginning.  I painted my favorite childhood new year memories in the pages.

How did you come up with the design for the Nian Monster? Did his look change much throughout the editorial process? Do you happen to have any images of his development that you could share?

As a kid, when we learn about Nian’s story, I always imagined it sort of looking like another Chinese mythological creature, Qilin (https://en.wikipedia.org/wiki/Qilin).  While Qilin is considered a heavenly creature who protects the mortal world, Nian is a trickster.  Qilin looks a bit more like the relative of a dragon.  I imagine Nian would look like an earthy creature – the Chinese Lion.  I pretty much drew the Nian from my childhood imagination.  As for Nian’s color, my gut feeling is to have it be an orange and red creature, since they are the color of the New Year.  But I also did a color test of the green and blue color scheme.  The doubt I had was that I knew there would be many red elements in the background, as well as Xingling’s outfit.  I was worried the color would clash.  But after the color test, I don’t like the blue and green color.  It doesn’t feel right.  I decided to stay with red and orange and make the color work. 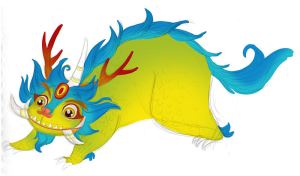 How about Xingling? Is the way she looks now how you envisioned her from the start?

When I first read Andrea’s manuscript, I could see Xingling very clear in my head.  While I knew Xingling’s look well, I did spend some time trying to come up with a cute outfit for her.  I want her to feel relatable to our readers, but still reflect her regional culture trend.  I therefore researched current girl fashion styles in Asia.  The style of her pink dress is fairly trendy in China and Korea.  But I also tried to balance and not to push it too far.  I want the illustration of the book to be time lasting and have universal appeal.  Towards the end of the book, Xingling changes to a little red dress. I wanted her to wear red to celebrate the New Year tradition.

Your depiction of Shanghai is so detailed and vibrant. Did it take a lot of research for you to create the Shanghai environment, or are you familiar with the area?

Jordan, my art director at Albert Whitman, sent me a lot of reference images of Shanghai.  I also went online and did research to get myself familiar with the cityscape of Shanghai.  I have never been to Shanghai, so all the Shanghai city designs are heavily relied on Google.  As for the atmosphere of the city, that is drawn from my own experience growing up in Hong Kong and occasional travel to China.

What else are you working on right now?

I am working on a couple of new picture book and graphic novel ideas.  I want to try writing my own books.  My stories are focused in culture diversities, some are drawn from my personal experiences.  I was born in China, immigrated to Hong Kong during British colonial time and then moved to the US.  I have been a citizen of three countries.  I am blessed and never get into bad discriminatory situations.  Yet, it’s still challenging to grow up and be the kid that’s different for one reason or another. With the current political climate, there is more urgency to share diversity stories with children.  Ensure the children that it’s OK to be different.  It doesn’t matter if they have different cultures, skin color, beliefs etc., their voices and stories matters.

Thank you so much for your time, Alina! We can’t wait to see what you illustrate next!

Andrea is giving away a copy of THE NIAN MONSTER to one of our readers! Just comment on any of the posts celebrating her launch, and you will be entered to win! You can also buy a copy of the book at IndieBound, Barnes & Noble, and Amazon.

10 responses to “Interview with THE NIAN MONSTER Illustrator, Alina Chau!”